Prior to European settlement, land in the Millers point area was occupied and utilized by the people of the Cadigal tribe. Millers Point and most foreshore area and Port Jackson and its waterways were rich in marine resources and provided an ideal environment in which to live and gather food for its original inhabitants.

The principal focus of early harbour settlement by the First Fleeter was Sydney Cove and in particular "The Rocks", which was the rocky, western promontory of Sydney Cove. By the 1820s, as the population grow, many new arrivals spread out into the Millers Point area.

The name 'Millers Point' appears to have arisen about this time, reflecting the social and visual significance of the early milling industry represented by the prominent windmills that had been constructed in the area by that time.

Lower Fort Street was still in its infancy in the 1830 and was little more than a widened access track, but throughout this decade it became a desirable place to build, particularly for the merchant elite associated with the maritime trade.

The first building on this site appears to have been built around 1880 by wool and tallow broker named William Oliffe. Known for years as the "Oliffe Terrace", it is likely to have been a relatively upper middle class residence, given its prime Lower Fort Street location and Oliffe's profession as a commodities merchant. By the end of the 19th century and following occupation by a succession of owners/tenants, the terrace eventually reflected the social change occurring in the urban areas as middle class families began to move out of inner Sydney into the mushrooming suburbs, leaving the working class behind.

THE 1900s, PLAGUE AND THE SYDNEY HARBOUR TRUST

What changed Millers Point and the face of the Sydney Harbour Foreshore forever was the arrival of the plague in 1900 and the subsequent Government response to the disease. The Sydney Harbour Trust was established in 1900 to take over and clean up the wharves and the government set about resuming large tracts of harbour-side land. The Oliffe Terrace was resumed, along with neighbouring properties, but survived demolition until the 1920.

The history of the hotel is often confused by the presence of in earlier hotel with the same name. However the earlier Harbour View Hotel, which was on the corner of George and Lower Fort Streets, was demolished to make way for the Harbour Bridge.

The present Hotel during bridge construction

The construction of the present Harbour View Hotel in 1924 was a joint venture between the Government, who owned the land and Tooth & Co., who provided the capital. Architects were Prevost and Waterman. By 1927 it provided a convenient watering hole for the thirsty workers constructing the Harbour Bridge.

As with many hotels in the urban area, the hotel gradually felt into a poor reflection of its more illustrious past, but it has now been completely refurbished by its new owner, Mr Brian Perry, to reflect the standard of amenity generally applying to this area of modern day Sydney.

The building's significance has been recognized by the various authorities, having an order placed on it in 1989 by the Heritage Office and listing Permanent Conservation by the same authority in 1999 on the State Heritage register. The Council of the City of Sydney has included the hotel in its Local Environment Plan as a building of local Significance.

Google Rating
4.1
Based on 38 reviews 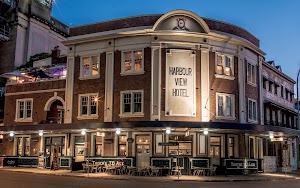 HUGO CHEN
00:19 16 Mar 20
I would like to spread my appreciation to the owner, the manager and the staffs of this amazing Pub who offered their generosity on opening their bar and beautiful bridge room for our newly wedded couple bro have amazing photos done in rain! Your kind heart and help means a lot to everyone of us and we will treasure this memory forever!

Harry Hillis
03:07 11 Feb 20
Amazing service from the entire team at the Harbour View Hotel. During Sydney's weekend of crazy wet weather, everyone at the hotel went above and beyond to ensure our party was dry and everyone was happy. Angela, Brian and Doug were fantastic! We are so happy you were able to accommodate our difficult requests and I will be recommending to anyone who needs venue for an event to come to you guys. Thank you!!!

Eddie Hilaire
01:42 13 Jan 20
Great place for a catch up with friends. Food and beverages are excellent. Reasonable pricing

Steve Nussbaum
23:05 05 Jan 20
A spectacular perspective with very good food in a unique neighborhood up the hill from the touristy bits of the Rocks. Eat on the terrace up top for the views.

Dan Wood
07:23 06 Dec 19
I had a delcious wagu beef burger with chips here for 16 dollars. It also came with any beer of my choice. The burger was delicious. Tasty beef with a good amount of filling. 6.8 out of ten

Andrew Jens
05:26 23 Nov 19
A pretty special place that I wish was my local. A fantastic view and the food was really nice. Sure, it's pricey, but if you manage to snare a seat on the top balcony, you'll have a great afternoon.

Jennifer Wong
03:51 20 Nov 19
Had my 50th here and was not disappointed. The staff were so accommodating and platters where delicious and generous ... sooo much food. Bar person was amazing and so helpful, like all the staff were. If I could give these guys more than 5 stars I would. It's our go-to for a nice casual dinner or lunch when in the city. We've taken visitors from overseas there ... great location, great pub food, and great staff.

Jennifer Wong
03:51 20 Nov 19
Had my 50th here and was not disappointed. The staff were so accommodating and platters where delicious and generous ... sooo much food. Bar person was amazing and so helpful, like all the staff were. If I could give these guys more than 5 stars I would. It's our go-to for a nice casual dinner or lunch when in the city. We've taken visitors from overseas there ... great location, great pub food, and great staff.

Elly Katerina
02:41 09 Oct 19
Service was great, seafood platter was excellent, fresh. Recommend for a casual lunch and a relaxing drink right under the Harbour Bridge.

Jason Speck
23:17 15 Sep 19
Great pub under our huge Harbour Bridge. Fantastic views away from the touristic stream running through the rocks. Authentically Australian, this is a great pub to either unwind or party. Plenty of little spaces (including terraces with views) to do your own thing. Function rooms are one of the best kept secrets in town. Cheap, great views and central to everything.

John Chesher
21:32 05 Sep 19
Back at the Harbourview. The best kind of fun on a Thursday night. #livemusic

Kareena Prado
21:08 28 Aug 19
Love its pub, great food and awesome view..For those old enough to remember, this is the pub from the aussie movie Monkey Grip with Jo Kennedy..

Ed Ryder
14:24 07 Jul 19
This review is entirely about the people...Brian and his staff are amazing. We're a bunch of Yanks who had a function on their rooftop terrace and they went WAY beyond the call of duty. THX!! 🇺🇸❤🇦🇺

Michael John Toms
01:35 16 Jun 19
Great service with a smile and an extensive menu with tantalising views.

Johnny Rocket-eer
10:56 19 Apr 19
Great place to enjoy the company of friends and the greatest pub view in Sydney. Brilliant seafood

Penny Bateman Noyce
04:28 07 Apr 19
Have just had a week and a bit in Sydney and had three meals at the Harbour View! Fantastic food at a very reasonable price, good wine list and fantastic service! Will definitely be back on our next trip 👌Not failing to mention the great views! 5 stars easily ...

Julie Perry
03:48 28 Jan 19
The Harbour View hotel is in a great location with fabulous views from the cocktail bar, great value with fabulous food and a fun atmosphere. I would definitely recommend the venue for functions and parties 😆

Joe Coze
21:14 26 Jan 19
Attended for Australia Day with seven friends. Location is perfect! Right from the onset it was evident that Security was enforced to ensure all patrons had a lovely day. Security were very friendly and professional at all times. Service from staff was exceptional especially due to the extreme hot weather. Food was average for pub food.The highlight of the day was the awesome band playing on the ground level. The Hard Rocking Amigos were absolutely amazing. They played and entertained patrons for hours without even taking the a break. The performance was one of the best we have ever seen and it was quite evident that everybody felt the same. Well Done Gentleman. Thank you. Also had the pleasure to meet the Licensee on the day who was an absolute Gentleman and went out of his way to ensure everyone enjoyed their day. Thank you to Management and staff for a fantastic day

Paul Hewitt
03:00 16 Dec 18
Had a birthday function with 35 guests on the balcony yesterday . Was a fantastic experience with great service and great food platters. Very reasonable. Thank You.

Anne Phillips
05:48 10 Dec 18
Great find hidden at the corner of the bridge. Nothing special or spectacular just a great casual spot .

Susan Robinson
07:08 29 Oct 18
Had the special Steak chips gravy and a pint the steak was cooked beautifully x